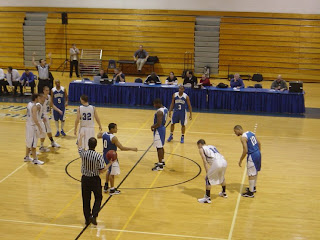 The Berkeley College Knights men's basketball team participated in the Frank Lospitalier Classic at Mount Saint Mary College in Newburgh, NY, for the first time this weekend and nearly rebounded from a tough first round loss to nearly steal a win in the consolation game.

The Knights competed against the host team in the first game of the tournament, which resulted in a lopsided victory for the Mount Saint Mary Blue Knights despite a strong second half by the Berkeley College Knights, 91 to 50.
The Knights were led by Michael Bloomfield and Willie Bowman III who scored 11 points each.
The Knights bounced back in the consolation game against Marywood University, trailing by only nine at the half, 41 to 32. The second half was a close contest throughout with the Pacers of Marywood pulling out the win by a final score of 82 to 70.
Jonathan Dorismond scored 18 points and grabbed nine rebounds to lead the Knights and was selected to the All-Tournament team.
Posted by bdm at 9:41 PM