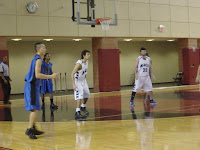 The Berkeley College Bulldogs men's basketball team participated in the Ramapo College Tip-Off Tournament for the third straight year and had their best showing in the tournament, giving both Eastern Connecticut State and Yeshiva University a run for their money.

The Bulldogs were neck and neck in the first game of the tournament with the Eastern Connecticut Warriors before falling behind by 14 at the half, 43 to 29. The Bulldogs fought back early in the second half, trimming the lead to eight points before the Warriors pulled away with the victory by a final score of 82 to 61. The Bulldogs were led by Donovan Black and Marcus Jones with 17 and 14 points, respectively. 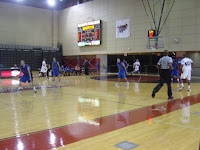 In the consolation game against Yeshiva University, the Bulldogs had their closest game of the tournament, closing within seven points several times late in the game before early foul trouble and Yeshiva's zone defense eventually caught up with them and the Maccabees pulled away with a hard fought defensive victory by a score of 65 to 48. Donovan Black led all scorers with 23 points and Roger Wan had a career best 11 points to lead the Bulldogs.

The Bulldogs next travel to Hackettstown to face the Centenary College Cylones on Wednesday, November 19, at 7 P.M. The game will be broadcast live on the web at http://pennatlantic.com/main.php?tableName=event&fileName=results&recordId=&module=event-results&orderBy=&searchIt=yes&sport=0&month=0&day=01&year=2007&conferenceId=77&schoolId=418