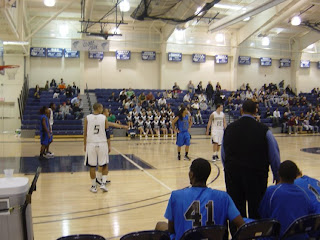 The Berkeley College Bulldogs men's basketball team couldn't overcome a listless first half and poor outside shooting in a losing effort against the Centenary College Cylones Wednesday night. The Bulldogs trailed the Cyclones 44 to 17 in the first half.

Trailing by 27 points, the Bulldogs fought hard in the second half quickly cutting the Cyclones lead down to 17 points, but a lack of time and poor foul shooting spoiled the effort as they lost by a final score of 73 to 47 despite outscoring the Cylones 30 to 29 in the half and shooting 0 for 16 from the three-point line.


The Bulldogs were led by senior guard James Bozor who came off the bench to record 12 points, 4 steals, and 5 rebounds and freshman forward Savereo Jackson with 10 points, 7 rebounds, and 3 blocked shots.

The Cyclones improved to 2-1 on the season while the Bulldogs fell to 0-5.

The Bulldogs next game is against Rutgers-Camden on December 1 at 7 P.M. The game will be played at Gloucester Community College.
Posted by bdm at 8:49 PM