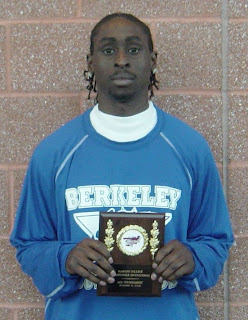 Donovan Black of the Berkeley College Bulldogs men's basketball team was selected to the Ramapo College Tip-Off Tournament All-Tournament Team. Black led all scorers at the tournament with a total of 40 points, scoring 17 in the first game against Eastern Connecticut State and 23 against Yeshiva University in the consolation game. Tim Wesley of Ramapo was selected as the tournament MVP scoring 39 points overall in the two games for the Roadrunners. Other selections included Chen Biron of Yeshiva University, Jeremy Thompson and Edwin Ortiz of Eastern Connecticut, and Ahmad Hassan of Ramapo College.
Black has led the Bulldogs in scoring in every game except one this season. He joins Jahlil Shannon and Richard Webb as past selections to the All-Tournament team.
Posted by bdm at 9:32 PM