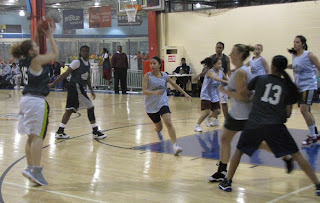 The Berkeley College New York men’s basketball team ended the 2009-2010 season on a positive note with a convincing 88-55 victory over Pratt Institute, finishing the regular season on a four-game winning streak and an overall record of 8-9 and 3-3 in the Hudson Valley Men's Conference.

Berkeley, while narrowly missing qualifying for the HVMAC championship tournament for the fifth consecutive season, will have an opportunity to finish the season at .500 when they take on their rivals from New Jersey, the Berkeley Bulldogs, in the annual Berkeley Cup on Saturday, February 27, at Borough of Manhattan Community College at 2 P.M.
Posted by bdm at 9:32 AM

Despite their best three-point shooting performance of the year, the Berkeley College Bulldogs lost to the Marywood University Pacers on Sunday by a final score of 79 to 61.

Marywood University placed five players in double-figures and connected on nearly 53% of their shots from the floor. The win improved Marywood to 9-13 on the year while the Bulldogs fell to 3-19. Marywood built a solid ten-point lead by halftime and carried that double-digit lead for much of the second half until Justin Lewandowski nailed a three for the Bulldogs to pull Berkeley back to within seven with just under ten remaining. Lewandowski would finish the night with a game-high 20 points and connected on 6 of 12 attempts from behind the arc.

Three other Bulldogs joined Lewandowski in double-figures as Donovan Black had 16 and Jamal Salaam had 11. Andrew Jarvis added 10 for Berkeley.

Berkeley's final game of the season will be at The Berkeley Cup on February 27 at 2 P.M. at The Borough of Manhattan Community College.
Posted by bdm at 6:14 PM

The Berkeley College New York men's basketball team swept Sarah Lawrence College and Bronx Community College this weekend to improve their overall record to 7-9 and extend their winning streak to three games heading into the final weekend of the regular season.

The Knights close out the regular season against the Pratt Cannoneers in a Hudson Valley conference contest next Saturday, February 13th, at 7:30PM.
Posted by bdm at 10:41 AM