ESPINO NAMED PLAYER OF THE WEEK FOR HVMAC 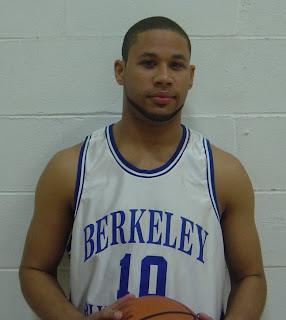 Senior forward Moyram Espino (Forest Hills/Hillcrest) was selected as the Co-Player of the Week for the Hudson Valley Men's Athletic Conference.

Espino averaged 13 points, 4.5 rebounds, and 4 steals per game for the Berkeley Knights in wins over Vaughn College and Pratt Institute as the Knights improved to 5-0 in the HVMAC.
Posted by bdm at 4:38 PM

The Berkeley College Knights, in the midst of a four-game losing streak during one of their most competitive scheduling stretches, regained their winning touch with two resounding Hudson Valley Men's Athletic Conference wins over the weekend to climb back over .500 for the season at 7-6 and remain undefeated in the HVMAC at 5-0.

On Saturday night against Vaughn College, the Knights broke open a close 12-8 game with a 14-0 run midway through the first half that led to a 75-38 win. Senior forward Moyram Espino (Forest Hills, NY/Hillcrest) led a balanced scoring attack with 14 points while sophomore forward Francis Edouard (Brooklyn, NY/Nazareth) had his best game of the season, finishing with 11 points, six rebounds, and three steals. The Knights defense also forced 35 turnovers and swiped 20 steals.

On Sunday, the Knights came out the gate slowly against Pratt Institute and led by just six at halftime, 35-29. But the Knights quickly found their rhythm to start the second half by going on a 19 to 2 run to extend to a 57-31 lead and eventually won by a score of 80-46. Senior guard James Dorismond (Bronx, NY/Bread & Roses) registered a double-double with 23 points and 11 rebounds while dishing out six assists. Major contributions also came off the bench from freshman guard Chevon Hope (Rosedale, NY/Martin VanBuren), who scored nine points and sophomore forward Jamel Culver(Brooklyn, NY/Nazareth), who added six points and pulled down four rebounds.

The HVMAC lead is on the line on Saturday, January 31, against conference rival St. Joseph's College at 7:30 P.M. at Brooklyn Technical High School.
Posted by bdm at 10:41 AM

The Berkeley Bulldogs lost a double overtime thriller to County College of Morris by a final score of 99 to 97 last night to drop the Bulldogs to 1-15 on the season.

The Bulldogs led early before falling behind by 11 at halftime. The Bulldogs quickly erased the deficit in the second half and a clutch three pointer and tip-in following a missed free throw at the end of regulation by senior Mannie Malasig sent the game into overtime.

Despite losing three key players to foul trouble during regulation, the Bulldogs managed to make it a free throw battle against the Titans in the first overtime to send the game into a second overtime.

The Bulldogs and Titans battled back and forth in the second overtime before the Titans pulled away at the free throw line.

The Bulldogs were led by Malasig who dropped 28 points on the Titans. Team leading scorer Donovan Black chipped in with 24 points. Freshman forward Anthony Crawford added 14 points before fouling out during regulation.
Posted by bdm at 12:55 PM 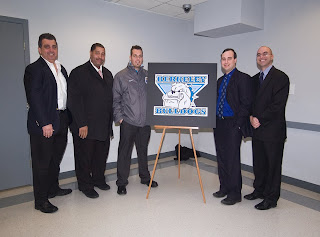 The Berkeley Knights gave the F.I.T. Tigers a battle in the first half of their non-conference matchup and trailed by only five points, 34-29, with four minutes remaining in the first half, but costly turnovers proved to be the Knights' undoing as the Tigers found their groove and coasted to a 113-63 victory.

The loss was the Knights' fourth consecutive non-conference loss.

The Knights resume their conference play with two games next weekend against Vaughn College on Saturday, January 24, and Pratt Institute on Sunday, January 25.
Posted by bdm at 3:24 PM

The Berkeley Bulldogs fought hard against the Bergen Community College Bulldogs, but their effort was in vain as they fell 77 to 54 to fall to 1-14 on the season.

Berkeley kept it close until late in the second half and trailed by only seven at the half, 36 to 29. Berkeley was led by Donovan Black with 14 points and Mannie Malasig with 13 points. The Bulldogs play County College of Morris on Thursday, January 22.
Posted by bdm at 6:07 PM

The Berkeley College Bulldogs fell to Union County College 75 to 64 to fall to 1-13 on the season. The Bulldogs had their best showing ever against Union, leading 56 to 55 with just under ten minutes remaining in the game, but couldn't hold on for the win.

The Bulldogs were led by the team's leading scorer, Donovan Black, who dropped 22 points. Senior Mannie Malasig added 16 points in the losing effort. The Bulldogs next play against Bergen Community College on Thursday, January 15.
Posted by bdm at 6:04 PM

BOATSWAIN NAMED TO ALL TOURNAMENT 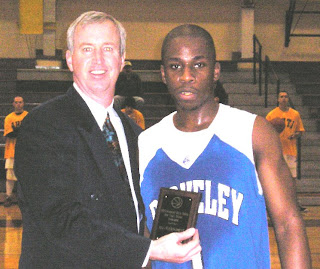 Sophomore guard Jamal Boatswain (Brooklyn/Transit Tech) was named to the Northeast Delta Dental New Year's All-Tournament Team this past weekend in New Hampshire. In the consolation game of the tournament, Jamal scored 17 points including four three pointers to lead the Knights in scoring.
Posted by bdm at 2:56 PM

Having lost several key players to injury, the short handed Knights gave their hosts a tough time in the opening game, trailing by only five at halftime to NHTI before succumbing 77 to 52. The Knights were led by James Dorismond, who scored 18 points.

In the consolation game against University of Maine - Augusta, the Knights quickly fell behind by a score of 18 to 3 before mounting a 25 to 9 run to take the lead. The Knights trailed by two at halftime, but couldn't keep the momentum and fell 91 to 78.

The Knights were led by Jamal Boatswain and James Dorismond, both of whom scored 17 points. In addition, Jamal was named to the All-Tournament team and James scored his 1,000 point and became Berkeley College's all-time leading scorer.

The Knights' next game is at 1 P.M. on Sunday, January 18, against the third-ranked team in the nation in The Fashion Institute of Technology.
Posted by bdm at 2:42 PM

A first half of porous defense that saw the Drew University Rangers shoot 73% from the field doomed the Berkeley College Bulldogs as they fell behind by 19 at halftime, 47 to 26.

The deficit was too much to overcome, even though the Bulldogs quickly cut the lead to nine points within just the first four minutes of the second half and had it down to eight with less than eight minutes to play.

A couple of timely three point buckets by Drew put the game out of reach as the Rangers pulled away by a final score of 72 to 58.

The Bulldogs were led by freshman Anthony Crawford, who netted 13 points in only his second game of the season after scoring 12 against Army three nights earlier. Fellow freshmen Kurtis Rivera added 11 points and Savereo Jackson 10 with a team high eight rebounds.

The Bulldogs dominated on the boards for only the second time all season, leading 34 to 23 in rebounds with 11 offensive rebounds, but paid the price for 19 costly turnovers that oftentimes destroyed any momentum they were able to generate.

The loss drops the Bulldogs to 1-12 on the season. The Bulldogs next play at Union County College on January 13 at 7 P.M.
Posted by bdm at 10:49 PM

The Berkeley College Bulldogs made history on Saturday, January 5, when they traveled to West Point in order to compete against an NCAA Division I opponent for the first time in Berkeley College history.

The Bulldogs were invited to West Point to compete against the Army's junior varsity squad, only to find several varsity players participating in the game while rehabbing injuries. The Bulldogs, however, were not intimidated and gave Army everything they had in an 87 to 61 loss.

"I was very pleased with the effort," said Coach Wilbur. "Considering the intimidating surroundings of a Division I gym and the level of competition, I felt our guys did an excellent job."

The Bulldogs next game is against the Rangers of Drew University on Tuesday, January 6, at 7 P.M.
Posted by bdm at 8:35 PM

The Berkeley College Knights lost a tough game to Bronx Community College on Sunday, January 4, by a score of 75 to 59.

The Knights were hampered by the loss of two key players to injury in the second half allowing the Broncos to pull ahead for good. The loss leaves the Knights with a 5-3 overall record heading into a weekend tournament in New Hampshire at New Hampshire Technical Institute.
Posted by bdm at 8:30 PM