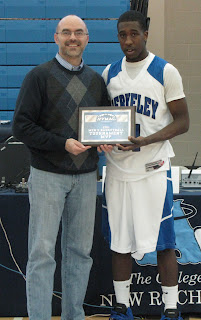 Bovell also managed 10 rebounds in the semis and was 6 for 13 from three-point range for the tournament.
Posted by bdm at 11:35 AM 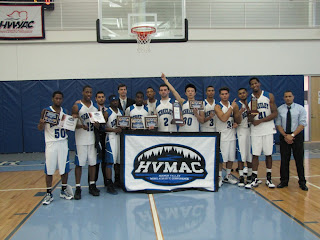 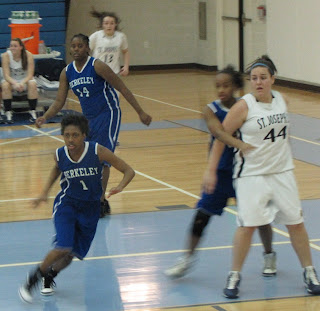 The New York women's basketball team lost in the semifinals of the Hudson Valley postseason tournament to St. Joseph's College by a score of 61 to 35.

"It was a great first season for us," said head coach Tomlinson following the game. "We learned a great deal about the conference and about ourselves and we are confident that we will do even better next season."
The team was led by freshman guard Davene Willis (East New York Family Academy/Brooklyn) with 10 points and 13 rebounds and freshman center Rahinet Koti (Walton/Bronx) with nine points and 11 rebounds.
Posted by bdm at 11:15 AM

The New York women's basketball team accomplished something no other basketball or soccer program has ever done in Berkeley College history Monday night and that was to lead a member of the powerful NJAC Conference at halftime. The Knights played inspired basketball to enter the half with a 22 to 21 lead over NJCU. It was the latest in a series of firsts for the first-year program.

Berkeley was led by 6-foot-2 freshman center Rahinet Koti (Bronx, NY/Walton), who finished with 15 rebounds (10 defensive), seven points, six blocks and two steals in 35 minutes before fouling out. She had nine rebounds in the first half.

Berkeley scored 11 of the final 15 points of the first half to claim its first lead of the game with 1:21 remaining and led at the break, 22-21.

The Knights went 6-0 in conference play and secured the #1 seed in the upcoming conference postseason. The Knights defeated Vaughn College and Sarah Lawrence College this past weekend to complete the undefeated conference regular season while also recording their eighth and ninth consecutive victories, the longest win streak in program history.

The team is currently the 4th ranked team in the United States Collegiate Athletic Association.
Posted by bdm at 2:44 PM

In yet another historic first for Berkeley College athletics, the New York women's soccer team officially began competing as a program in the Urban Soccer League indoor league in January.

The women are already off to a strong start, winning their first game in program history last Sunday by a score of 4-1.

The Knights will compete as a varsity, intercollegiate program this upcoming Fall as a member of the Hudson Valley Women's Athletic Conference.
Posted by bdm at 11:17 AM

NJ LOSES CLOSE ONE TO LEHMAN

The New Jersey men's basketball team lost a tight game against Lehman College last night by a score of 74-65.

The came was close throughout with the Knights down by five at the half, 42-37. The most either team led was by ten with Lehman reaching that mark with eleven minutes remaining in the game 59-49. The Knights would respond with an 8-0 run to pull within two, but would get no closer.

The Knights were led by sophomore guard Gary Williams, Jr. with 21 points. Freshman forward Andrew Webber led the team with 7 rebounds and junior Andre Javis and freshman Donovan Wrice each had 2 blocks.

The loss dropped the Knights to 2-11 on the season. They next play at Valley Forge Military College this Friday at 6 P.M.
Posted by bdm at 11:08 AM