KNIGHTS RUN OUT OF GAS AGAINST GULLS

The Berkeley College New York men's basketball team, reeling from a tough overtime loss the night before against Gordon College, lost to Endicott College by a score of 94-80.

The Knights fall to 5-6 on the season with the loss.

Early in the first half, Berkeley jumped out to a 12-6 advantage behind six points from Knights leading scorer Jose Stable (Brooklyn, N.Y.). Berkeley continued to control the pace of the game, stretching their first half lead to as large as 14 points at 31-17 with 8:36 remaining until halftime. Stable netted 12 of his game-high 24 points in the opening stanza while teammates Jovan Bovell (Jamaica, N.Y.) and Damir Redzepagic (Bronx, N.Y.) each scored six points to lead the offense.

Down 14 in the first half, Endicott got their offense back on track and outscored Berkeley 36-10 to hold a 45-41 halftime advantage.

In the second half, Endicott's bench came alive and the Blue and Green held a lead as large as 12 points midway through the second half before eventually stretching it to 14 in the final moments of the game.

Berkeley's Bovell came off the bench to score 15 points on 5-of-8 from beyond the arc and sophomore guard Kaseem Williams (Brooklyn, N.Y.) added 10 points, five rebounds and four assists in the losing effort. Stable's 10 rebounds were also a game-high to help the freshman reach a double-double.

Berkeley outrebounded Endicott 45-35, including 16 offensive boards leading to 10 second chance points. The Knights play at home this Sunday against Culinary Institute of America to begin Conference play.
Posted by bdm at 8:45 AM

The Berkeley College New York men's basketball team failed to hold a double-digit second half lead and eventually lost in overtime to Gordon College 87-81. The loss dropped the Knights to 5-5 on the season.

The Knights then went up 74-71 to start the extra frame when Damir Redzepagic sank a free throw and made a layup, but Gordon fought back with a decisive 9-2 run putting Gordon up 80-76 with 1:50 to go.

The Knights were led by Redzepagic with 23 points and Jose Stable with 13 rebounds.
Posted by bdm at 8:35 AM 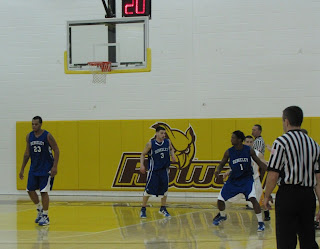 Berkeley College's New Jersey men's basketball team posted their second win of the season to improve their record to 2-6 behind sophomore power forward Justin Savage's (so. Newark, NJ/Kearny Christian Academy) first double-double of the season. Savage totaled 11 points and a game-high 13 rebounds and was named to the All-Tournament team.