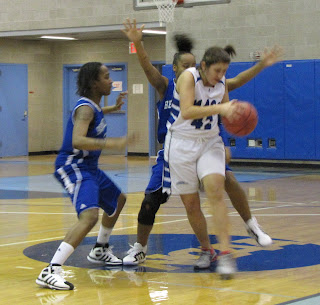 The Berkeley College New York women's basketball team improved their record to 7-4 with a dominating win over Yeshiva University, 78-35. The win extended the Knights win streak to five games after a 2-4 start.


The Knights jumped out to an early lead by opening the game with a 14-0 run before Yeshiva put two on the scoreboard. The Knights would continue to dominate in the first half, heading into the break up 45-13.


The Knights received contributions from all eleven players with each scoring at least two points. Leading the Knights were junior guard Savasia Caraballo (John F. Kennedy/Bronx, NY) and sophomore center Rahinet Koti (Walton/Bronx, NY) each with 14 points. Koti would finish with a double-double with 14 rebounds as well.


The Knights return to action January 4 against Arcadia University.
Posted by bdm at 10:12 AM

Junior guard Gary Williams Jr. (Jersey City, NJ/Marist) put back the rebound of his teammate’s missed shot as the final buzzer sounded to lift the Berkeley College men’s basketball team over Rutgers University-Camden, 64-62, to earn Berkeley's first win ever over a member of the New Jersey Athletic Conference. The victory was the second straight for the Knights, lifting their record to 3-7. The Scarlet Raptors fall to 2-6.

After building a 32-28 halftime lead, the Knights increased their bulge to as many as 11 points midway through the second half, leading 50-39 with 13:52 remaining on a layup by freshman guard Davonn Boyd (Newark, NJ/Kearny Christian Academy).

Rutgers-Camden, however, started chipping away, aided by 10 points from sophomore guard Woody Redding (Philadelphia, PA/Northeast Catholic) – eight from the foul line – and three field goals from junior guard Bruce Stephens (Marlton, NJ/Cherokee). Redding, who was 14-for-17 from the foul line on his way to a game-high 22 points, tied the score at 62-62 with 18.2 seconds remaining on the first end of a pair of foul shots, but missed the second shot. Boyd grabbed the rebound and the Knights called a timeout with 12.8 seconds remaining to set up the final play.
With the clock ticking down toward a potential overtime, sophomore guard Andrew Webber (Columbus, OH/Thomas Worthington) missed a jumper, but Williams streaked into the paint to grab the rebound and put it back for the winning shot at the buzzer.

The Scarlet Raptors held an early 12-6 lead before the Knights fought back, finally taking the lead at 18-16 on a layup by Webber. Berkeley increased its lead to as many as six points (28-22 and 32-26) before settling for a 32-28 halftime lead. They held the lead until the Raptors tied the game at 62-62 moments before the frantic finish.

Waynick and Williams Jr. each finished with 15 points to pace the Knights, while Webber and sophomore center Terah Mingo (Newark, NJ/Kearny Christian Academy) both added eight points. Webber also dished out a game-high five assists and led the Knights with seven rebounds, while Mingo and Boyd each added six boards. Freshman guard Dakwan Simmons (Newark, NJ/University) had a team-high five steals for Berkeley.

The Knights return to action Dec. 29 facing the host team on the first day of the Albright College Holiday Tournament.
Posted by bdm at 10:27 AM

WOMEN WIN FOUR IN A ROW

The New York women's basketball team defeated conference opponent Vaughn College 101-11 to improve to 6-4 on the season and 2-0 in the conference and extend their winning streak to four games.

The Knights will finish out 2011 with a game against Yeshiva University on Wednesday, December 21 at Baruch College at 8 P.M.
Posted by bdm at 9:15 AM

In the consolation game, the Knights would have to play two overtimes to defeat Penn State by a score of 88-87. Berkeley (2-7) was led by sophomore center Terah Mingo (Kearny Christian Academy/Newark, NJ) with game-highs of 26 points and 15 rebounds. Webber contributed with 20 points, four boards, and five assists and was named to the All-Tournament Team. Boyd ended the game with 18 points and eight rebounds.

The Knights head to Rutgers-Camden on Thursday for a 7 P.M. game.
Posted by bdm at 9:00 AM

The Knights would open up the second half with a 5-0 run to take their only lead of the game and the game would be close for most of the second half with no team holding more than a six-point lead until 2:26 remained in the game. Western New England would seal the game at the free throw line, making 17 of 20 attempts from the charity stripe.

The Knights were led by sophomore forward Jose Stable (EBC for Public Service/Brooklyn, NY) who led all scorers with 24 points and 18 rebounds. Only two Knights would end up in double figures for the game. Both teams would shoot less than 40% from the field for the game.
Posted by bdm at 8:49 AM

Every time the New York women's basketball team wins, they are setting a new record for the program. The team continued their amazing success this season by defeating Hudson Valley opponent, College of New Rochelle, 75 to 71, to extend their longest winning streak to three games and improve their record to (5-4, 1-0) on the season.

Having won only two games in their inaugural season last year, the Knights have not only eclipsed their historical win total so far, but have also secured their first tournament championship, and have a three-game winning streak this season as well.

Both teams came out with a fast pace and high energy style of play that entertained the Wellness Center crowd with both playing an up tempo style that prevented either team from taking control of the game. The biggest lead of the first half was seven held by Berkeley with five minutes to go in the first half.

CNR quickly erased that lead with a 10-3 run by the Blue Angels and tied the game up at 33 with a minute to go. Berkeley would end the half up 38-35.

In the second half, CNR came out and took control of the game to take a 56-47 lead. The Blue Angels could not hold the lead as the size of Berkeley took over. Berkeley out rebounded CNR 61-41 including 34 offensive rebounds that led to 19 second chance points. A jumper by junior guard Rachel Thomas (Murry Bergtraum/Brooklyn, NY) off of an offensive rebound from sophomore center Rahinet Koti (Walton/Bronx, NY) gave Berkeley the lead with two minutes to go in the game.

The Knights were led by junior guard Aiyesha Brown (John Adams/Jamaica, NY) with 31 points and 5 assists and Thomas with 23 points.
Posted by bdm at 2:59 PM

Led by tournament MVP Taisha Sherman and All-Tournament selection Aiyesha Brown, the Knights defeated Yeshiva University in the first game 80-51 and then College of New Rochelle in the championship game 80-60 to secure their first tournament championship in program history.

The wins improve the Knights record to 4-4 on the season.

Junior forward Sherman (Vanguard/New York, NY) led all scorers with 23 points against Yeshiva and 19 against College of New Rochelle. Junior guard Brown (John Adams/Jamaica, NY) had her best game of the young season in the championship, dropping 23 points and 5 assists to secure the trophy.

The Knights return to action this Wednesday against Vaughn College.
Posted by bdm at 10:02 AM