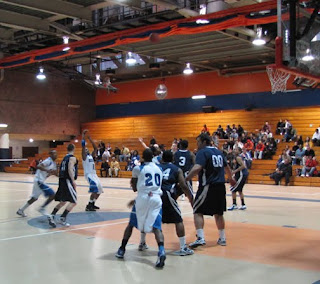 Tied at 13 with just under 10 minutes left to play in the first half, the Knights went on a 13-0 run over the next five minutes to take what appeared to be a commanding 26-13 lead. The Bears, however, would respond with an 11-0 run of their own to close within two with just over a minute remaining in the first half. The half would end tied at 28.
In the second half the Knights and Bears would trade baskets back and forth until the Knights would once again take a double digit lead at 56-46 with 10 minutes remaining in the game before the Bears would again respond with a 5-0 run to cut the lead in half. The Knights, however, seemed in control with an eight point lead with just over two and a half minutes left in the game, but the Bears would finish the game with a 13-4 run to squeeze out the one point victory.
The Knights were led by freshman center Joshua Witsell (Jericho/Jericho, NY) who led the team in scoring with 17 points and nine rebounds. Sophomore Jonathan Dorismond (Bread & Roses/New York, NY) and freshman Kaseem Williams (Boys & Girls/Brooklyn, NY) would add 15 points and 14 points, respectively.
The Bears were led by senior guard Justin Gist (Newsome/Newsome, FL) who would lead all scorers with 25 points.
The loss drops the Knights to 4-8 on the season and 1-3 in the conference.
Posted by bdm at 9:21 PM

The Berkeley College New Jersey men's basketball team lost its sixth consecutive game Friday evening to York College by a score of 90-58. York is currently undefeated in conference play and is 14-5 overall on the season. The loss drops the Bulldogs to 3-13 on the season.

The Bulldogs were led by Andre Jarvis who had 12 points and eight boards. Donovan Black added 10 points and seven rebounds.

The Bulldogs play The Fashion Institute of Technology at 1 P.M. on Saturday.
Posted by bdm at 11:51 AM

The Berkeley College men’s basketball team kept the game close until the last few minutes before falling to Rutgers-Camden 76-52.

Rutgers-Camden improves to 5-9 with its first victory since a 96-72 home win over St. Joseph’s College-Brooklyn on Dec. 7 while Berkeley falls to 3-12 on the season. The Bulldogs are now 0-5 against teams from the New Jersey Athletic Conference, having lost to The College of New Jersey, Montclair State University, Rowan University and Rutgers-Newark prior to their loss to Rutgers-Camden.

The teams traded leads three times in the early going until the Raptors took the lead for good, 16-15, on a three-pointer by junior guard Shawn Greene (Mt. Laurel, NJ/Lenape) with 9:54 remaining in the half. That field goal helped the Raptors to a 27-12 run to close out the half and head into the break with a 40-27 lead. Berkeley College forward Donovan Black (Morristown, NJ/Morristown) had 12 first-half points. Guard Justin Lewandowski (Bordentown, NJ/Bordentown Regional) added eight.

The Raptors held a 49-32 advantage off the boards. Rutgers-Camden shot 27-for-64 (42.2 percent) from the floor, while Berkeley shot 18-for-53 (34.0). Black led Berkeley with 22 points and forward Andre Javis (Hillside, NJ/Union) added a double-double of 10 points and 10 rebounds. Teammate Justin Lewandowski (Bordentown, NJ/Bordentown Regional) added 16 points.

Berkeley returns to action Friday with a 6 p.m. game at York (NY) College.
Posted by bdm at 5:12 PM

The Berkeley College men's basketball team won its second game in a row by defeating Albany College of Pharmacy 95-80 in an offensively-driven matchup at the Albert White Gym in Albany.

Albany jumped out to an early 10-3 lead with 16:33 to play before Berkeley quickly got back into the game. A layup by Witsell gave the Knights their first lead at 15-14 with 11:35 to go in the first half. A layup by Williams and two field goals by guard Stanley Hamp (Nazareth HS/Brooklyn, NY) expanded the lead to seven at 21-14 and closed out a 8-0 run. Albany closed the lead to four at 36-32 with 3:55 remaining when Berkeley went on another 14-2 run to close out the first half.

Guard Jonathan Dorismond (Bread & Roses HS/New York, NY) hit two 3-point jumpers to lead the charge and stake Berkeley to a 50-34 lead at halftime. The Knights shot 53% from the field in the first half, their best shooting percentage of the season.

Berkeley's hot shooting and relentless defense continued into the second half. Berkeley upped its lead to 22 points at 72-50 with 10:52 to play on a layup by guard Isaiah Didier (Sheepshead Bay HS/Brooklyn, NY) and Albany would get no closer than 11 points the rest of the way. Berkeley shot 54% from the field overall while the defense generated 15 steals and forced 18 Albany turnovers.

Dorismond and Hamp each added 13 points while guard Damir Redzapagic (Cardinal Spellman HS/Bronx, NY) added 10 points and pulled down a team-high 12 rebounds in registering his third double-double of the season. Guard Ben Sheppard led Albany with 24 points. With the win, Berkeley improved to 4-7 overall and 1-2 in the Hudson Valley Men's Athletic Conference. The Panthers fell to 3-7 overall and 1-1 in the conference.

Berkeley's next game will be on Saturday, January 23rd at 4:00PM against conference archrival St. Joseph's College at Borough of Manhattan Community College.
Posted by bdm at 4:41 PM

Despite an inspiring first half of basketball, Berkeley College failed to maintain the intensity necessary to pull out a victory against Union County College last night.

Tied at 41 at halftime, the Bulldogs shot a blistering 56.3% in the half led by sophomore forward Savereo Jackson and junior forward Donovan Black. The second half, however, would see the Bulldogs shoot only 26.5% going 0 for 9 from three-point range allowing the Owls to pull ahead for the 86 to 63 win.

The Bulldogs were led by Black with 17 points and Jackson with 13. Andre Javis led the team in rebounding with 7 boards and Justin Lewandowski had 4 assists. The loss drops the Bulldogs' record to 3-10 on the season.

The Bulldogs next take on the number one ranked Bergen Community College Bulldogs on Saturday, January 16 at 3 P.M.
Posted by bdm at 11:26 AM

The Berkeley College New York men's basketball team regained their winning ways at the New Hampshire Technical Institute's New Year’s Tournament in Concord, NH, with a 69-66 non-conference victory over the University of Maine at Augusta for a third place finish while snapping their seven game losing streak.

In their opening game against host NHTI, Berkeley jumped out to an early 8-4 lead on the home team. Freshmen Damir Redzepagic (Cardinal Spellman HS/Bronx, NY) and Kaseem Williams (Boys & Girls HS/Brooklyn, NY) scored 12 points and 11 points, respectively, to keep Berkeley within a single point at 26-25 with three minutes to play in the first half before the home team would go on a 14-4 run to end the half up by eleven points at 40-29.

Berkeley would get no closer the rest of the way as NHTI built upon their halftime advantage for an eventual 85-61 win. Williams led Berkeley with 22 points while Redzepagic registered his second double-double of the season with 15 points and a team-leading 12 rebounds and sophomore Stanley Hamp (Nazareth HS/Bronx, NY) contributed ten points.

In the consolation game against UMA, Berkeley once again jumped out to the early lead. Freshman Joshua Witsell’s (Jericho HS/Jericho, NY) layup put the Knights in front 12-4 with 16 minutes to play in the half. But UMA would fight back and took their first lead of the contest at 24-23 on a layup by their 6-5 power forward Moses Braithwaite with seven minutes remaining. But Berkeley quickly regained its composure and closed out the half with an 11-6 run with Isaiah Didier (Sheepshead Bay HS/Brooklyn, NY) hitting a 3-point jumper to put the Knights ahead 34-29 at halftime.

Berkeley started out the second half on a 16-9 run for its biggest lead of the game, 50-38, with 14 minutes to play before UMA would go on a 23-8 run of its own to lead 61-58 with seven minutes to play. From there on out the game turned into a back and forth match with both teams trading leads to the finish. Two free throws by Williams and a layup by Witsell off a steal from Hamp put Berkeley ahead for good at 66-63 for the eventual victory.

Witsell led the Knights with his second double-double of the season with 25 points and 10 rebounds. Williams added 14 points and was selected as Berkeley ’s representative to the All-Tournament Team. Honorable mention goes to UMA’s Braithwaite as the power forward was a one-man wrecking crew by scoring 37 of UMA’s 66 points and pulling down 30 rebounds in a losing effort.

Berkeley (3-7) looks to gain its first victory in the Hudson Valley Men's Athletic Conference as they travel to Albany Pharmacy next Sunday to play the Panthers at 1:00 P.M.
Posted by bdm at 12:58 PM

The Berkeley College Knights came out the gate for the new year playing inspiring basketball against a bigger and taller Division III Endicott College squad, but ultimately they were unable to translate their efforts into victory in a hard-fought 72-64 non-conference loss in their first home game of the season played at Borough of Manhattan Community College.

Trailing throughout the game, Berkeley managed to scratch and claw its way back and pulled within a single point 42-41 on a three-point play by Damir Redzepagic (Cardinal Spellman HS/Bronx, NY) with twelve minutes to play. But the Knights were unable to gain the lead as poor free throw shooting (15 of 26, 58%) and clutch baskets by the visiting Gulls near the end thwarted another Berkeley comeback.

Redzepagic led all scorers with 25 points and nine rebounds while Kaseem Williams (Boys & Girls HS/Brooklyn, NY) added 17 points and eights boards. The loss drops the Knights to 2-6 on the season. With the win the Gulls improve to 4-6.

Berkeley’s next action will be this weekend in Concord , NH on January 9-10, 2010 at 2:00PM as they make their second appearance in the New Hampshire Technical Institute New Year’s Tournament against the host Lynx. Quinsigumund Community College and the University of Maine-Augusta are the other participating teams in the tournament.
Posted by bdm at 10:31 AM