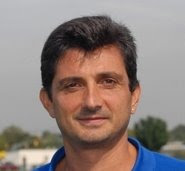 "We are very pleased to announce this addition to our coaching staff," said Brian Maher, athletic director at Berkeley College. "Coach Zomopoulos' extensive, playing, coaching, and professional experience will serve our student-athletes well both on and off the playing field. We are always looking for coaches who not only are experts in their sport, but also can serve as role models for our athletes and that is what coach Zomopoulos represents."
Mr. Zomopoulos had spent the last three years as the head coach for men's soccer at John Jay College during which time he led John Jay to the CUNYAC Conference Final in 2006. Prior to John Jay, Mr. Zomopoulos was the assistant coach for the Borough of Manhattan Community College men's team where he also assisted in the establishment of the women's program. During his time at BMCC, the men's team won Region XV and lost in the NJCAA Division III semi-finals.
Mr. Zomopoulos is a graduate of Columbia University where he played Division I soccer and won three Ivy League championships as well as reached the 1983 NCAA Division I Finals as a player.
Following his collegiate playing career, Mr. Zomopoulos entered the American Express Corporate Management program where he worked for American Express both in Manhattan and in Australia and has an extensive international business background.
Posted by bdm at 1:33 PM