The New York men's and women's basketball teams split this weekend at Albany College of Pharmacy and Health Sciences.

The women got the day started and gave the defending champion Panthers a run for their money in the first half before a 10-2 run to end the half gave Albany a 34-24 lead going into the break. The Knights would fail to get it under 10 points the rest of the way before falling 76-60 to fall to 2-2 in Conference play and 11-8 on the season.

Junior guard Rachel Thomas (Murry Bergtraum/Brooklyn, NY) would lead all scorers with 18 points and would chip in 8 rebounds to lead the Knights.

The men's team would continue their late season surge with a 100-63 win over the Panthers in the second game to improve to 12-7 on the season and 4-0 in the Conference. They have now won three of their last four.

The Knights would lead a balanced attack with ten players scoring with four in double figures. Junior guard Kaseem Williams (Boys and Girls/Brooklyn, NY) would lead the Knights with 22 points and seven steals with sophomore guard Mario Guzman (West Oaks Academy/New York, NY) adding 18 points from the bench including 3 for 3 from three-point range. Overall the Knights would go 11 for 20 from the three-point range.
Posted by bdm at 11:48 AM

The Berkeley College New Jersey men's basketball team fell to Central Penn College on Saturday 101-88 to fall to 5-12 on the season. It was the second time the teams met with Central Penn defeating the Knights in New Jersey 93-77.

The Knights are back in action this Thursday against the College of Staten Island.
Posted by bdm at 11:43 AM

A Gary Williams, Jr. (Marist/Jersey City, NJ) trey gave the Knights a 23-22 advantage with 5:13 remaining in the first half before Delaware Valley responded by outscoring Berkeley, 19-8, the rest of the way to take a 10-point advantage into the break.

Delaware Valley upped the lead to 16 midway through the second stanza, but the Knights would not go away and a Daniel Waynick (Hightstown/East Windsor, NJ) layup made it a 75-66 ballgame with 6:04 on the clock. The Aggies scored eight of the next 12, but Berkeley responded with five straight to pull to within eight, 83-75, with 3:09 remaining. Delaware Valley finally put the game out of reach by scoring nine of their next 11 points at the free throw line where they enjoyed an eye-opening 49 to 19 free throw attempt advantage. Delaware would outscore the Knights 37 to 13 at the free throw line.

Despite the loss, Waynick was outstanding in defeat for Berkeley as he was 11-for-14 from the field and 9-for-11 from the foul line for 31 points. He also added seven rebounds in 38 minutes of action. Terah Mingo (Kearny Christian Academy/Newark, NJ) added a double-double with 15 points and 11 boards.
Posted by bdm at 10:32 AM

The Berkeley College Knights split a doubleheader against the St. Joseph's College Bears on Saturday with the men winning the opening game before the women fell in the night cap.

Both games were extremely close despite large leads being held by both Knights squads in the second half.

The men led by as many as 20 points in the second half and by 14 with only four minutes remaining before the Bears went on a 13-2 run to close the gap to three, 83-80. The Knights, however, would clamp down and hold the Bears without a field goal for the remainder of the game while taking advantage of a turnover for a breakaway slam dunk to seal the win.

The men were led by All-Americans Jose Stable (EBC for Public Service/Brooklyn, NY) and Elijah Craig (Seward Park/Brookyn, NY), who led the Knights with 26 points and 11 rebounds and 18 points and 14 rebounds, respectively. Craig also added 4 blocks. The win improved the Knights' record to 11-7 on the season and 3-0 in the Conference.

The women got off to a slow start but still led 9-2 early in a game of runs. They would go into the half up 35-34 despite multiple players being in foul trouble early. They would extend their lead to seven early in the second half before a 19-5 run by the Bears put them down seven themselves. Another run by Berkeley would tie the game at 58 and the game would remain close until the final minute before the Bears would pull away for a 76-68 win.

The Bears would enjoy an enormous advantage at the free throw line that would mean the difference in the game shooting 46 free throws to Berkeley's 15. The Bears would convert 30 to the Knights 10 for a 20 point differential. The Knights were led by junior forward Janay Collins (The Bronx Guild/Bronx, NY) with 20 points and 15 rebounds and junior forward Taisha Sherman (Vanguard/New York, NY) with 17 points and six assists.

The loss dropped the Knights record to 11-7 and 2-1 in the Conference.

Both teams play another doubleheader next Saturday at Albany Pharmacy with the women at 1 P.M. and the men at 3 P.M.
Posted by bdm at 10:01 AM

The Berkeley College New Jersey men's basketball team has won two in a row to improve to 5-10 on the season.

The Knights defeated Penn State-Scranton 90-82 and Vaughn College 66-53 and now face Delaware Valley on Monday hoping to extend the streak to three.

The 5 wins are the most in a season for the New Jersey program and the win over Vaughn was the first home victory for the Knights who started hosting home games this season. They are now 1-2 at home.

The Berkeley College New York women's basketball team is on a roll having won four in a row and nine of their last ten after defeating Barber-Scotia College 67 to 57 today at the Martin Luther King Classic in Newport News, VA. The win improves the team's record to 11-5.

The Knights were led by junior forward Taisha Sherman (Vanguard/New York, NY) and junior guard Aiyesha Brown (John Adams/Jamaica, NY) who led all scorers with 19 points a piece. Junior forward Janay Collins (The Bronx Guild/Bronx, NY) had her second double-double of the Classic with 18 points and 14 rebounds.

The Knights now face The Apprentice School on Sunday while looking to sweep the Classic.
Posted by bdm at 4:12 PM

The win improves the team's record to 10-5 having won 8 of their last 9 games.

The Knights were led by junior forward Janay Collins (The Bronx Guild/Bronx, NY) with 13 points and 17 rebounds in only 29 minutes of play. Four other players would reach double figures in points, with junior guard Aiyesha Brown (John Adams/Jamaica, NY) with 15, and sophomore center Rahinet Koti (Walton/Bronx, NY) and freshman guard Janay Thomas (Longwood/Queens, NY) each scoring 11.

The Knights face Barber-Scotia College tomorrow at 2 P.M.
Posted by bdm at 9:36 PM 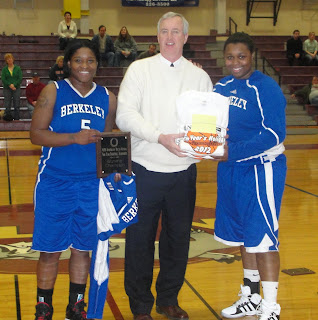 
The women defeated UM-Augusta by a score of 61-54 and then NHTI by a score of 90-71 to earn their second tournament championship of the season.

The wins improved the team's record to 9-5 and the team moved up three spots to number nine in the latest USCAA national rankings.
Posted by bdm at 9:25 AM

Berkeley College's New York men's and women's basketball teams advanced to the championship game of the NHTI Delta Dental New Year's Tournament with victories over the University of Maine-Augusta.

The New York men's basketball team defeated DeSales University in the first round of the Red Robin Holiday Tournament at DeSales to advance to the championship game of the tournament.

To get there the Knights would have to overcome a three pointer at the buzzer in regulation by the Bulldogs to send the game into overtime. In the overtime Berkeley would score the first six points and never look back in securing an 83-77 upset win over the Bulldogs. It is the first time DeSales (4-6) will play in the consolation game of its Holiday Tournament which started in 2001-02. The Bulldogs will take on SUNY-Potsdam (4-6) who fell to Alvernia University (7-3), 60-56, in the other opening round game on Tuesday evening in Billera Hall.

The Bulldogs took a 3-0 lead on the very first possession of the game on a three-pointer, but from that point forward it was all Berkeley (8-4) except for a late rally at the end of the second half. The Knights used an 11-1 run over the next five minutes to lead, 11-4, and extended that advantage to as many as 16 points (37-21) in the first half. DeSales scored six straight points late in the half to pull within 10, before settling for a 12-points deficit (39-27) at the break. The Bulldogs shot just 37.0 percent from the field in the opening 20 minutes as compared to 53.8 percent shooting for the Knights.

The second-half saw the Bulldogs chip away at the lead on several occasions, but each time Berkeley had the answer. The Bulldogs got within five (39-34) early in the half but a three from junior guard Kaseem Williams (Boys and Girls/Brooklyn, NY) and five straight points from sophomore forward Jose Stable (EBC for Public Service/Brooklyn, NY) pushed the lead back to 11 points with 12:57 left.

The overtime period quickly went Berkeley's way as the Knights scored six straight points to take a 74-68 lead and DeSales was never able to get within one possession on the scoreboard, eventually falling by six. Berkeley got 29 points and seven rebounds from Stable, 25 points, eight rebounds, and six assists from Williams, and 12 points, 14 rebounds, and five blocks from sophomore center Elijah Craig (Seward Park/Brooklyn, NY).
Posted by bdm at 8:43 AM