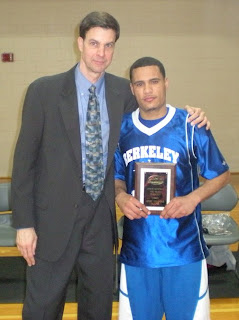 Senior point guard Jonathan Pena was named Most Valuable Player for the championship game of the Hudson Valley Men's Conference Basketball Championships that were won by Berkeley College over St. Joseph's College by a score of 75 to 71.

Pena led the Knights with 27 points and 3 steals in the championship game.
Posted by bdm at 9:05 AM 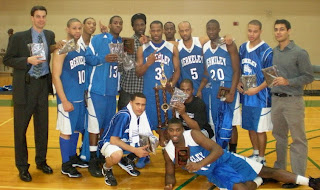 The Berkeley College Knights men's basketball team battled back from a double digit second half deficit to get within three points only to run out of time against Borough of Manhattan Community College Saturday.

The Knights begin play as the #2 seed in the HVMAC Tournament next weekend, Saturday, February 21, at Sarah Lawrence College.
Posted by bdm at 10:26 AM

The Berkeley College Knights men's basketball team swept back-to-back games over the weekend in dominating fashion to improve their overall record to 9-7.

On Saturday the Knights defeated Stockbridge College by a score of 90 to 57 led by seniors James Dorismond and Willie Bowman III with 24 and 15 points respectively.

On Sunday the Knights took over early with a 21 to 2 run to open their game against Sarah Lawrence College. The Knights won 97 to 52 led by Dorismond with 19 points and freshmen Phyllip Jordan with 12 points.

The Knights next compete against Borough of Manhattan Community College on February 14 at Noon.
Posted by bdm at 10:21 AM

The Berkeley College Bulldogs fell behind early to the Montclair State University Red Hawks by a score of 13 to 2 before going on a 10-3 run to close within four before Montclair switched to a full-court press that resulted in a 14-0 run to extend their lead to 30 to 12.

Montclair dominated the rest of the way in the first half taking advantage of 24 points off turnovers to lead 45 to 21 at halftime.

The Bulldogs, however, held their own in the second half behind 10 points each from senior Mannie Malasig, sophomore Donovan Black, and freshman Savereo Jackson as well as 6 for 13 shooting from behind the three-point line for the game.

Nevertheless Montclair was able to pull away for an 82 to 51 victory.

The Bulldogs next play on February 28 in the annual Berkeley Cup game. The game is being held at Borough of Manhattan Community College at 1 P.M.
Posted by bdm at 11:10 PM

The Berkeley College Bulldogs exploded in the second half for 54 points to defeat Raritan Valley Community College by a score of 85 to 69.

Despite trailing 37 to 31 at halftime, the Bulldogs were able to generate a record number of points in a half to run away with their second win of the season.

The Bulldogs were led by senior Mannie Malasig and junior Rich Webb who each scored 20 points.

The Bulldogs finish their regular season at Montclair State University on Wednesday.
Posted by bdm at 11:08 PM 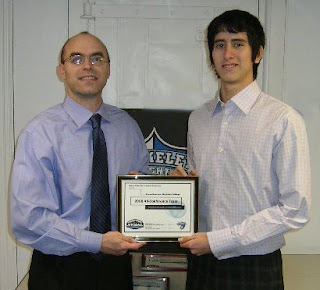 Bryan was an offensive force for the Berkeley Knights in their inaugural season in the Hudson Valley Men's Athletic Conference, leading the team in scoring.
Bryan is seen here with Director of Athletics for Berkeley College, Brian Maher.
Posted by bdm at 8:25 PM 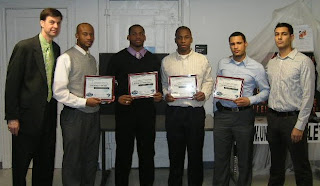 Willie Bowman was selected the MVP of the tournament and James Dorismond, Jamal Boatswain, and Jonathan Pena were all selected to the All-Tournament Team. They are seen here flanked by head coach Chris Christiansen and assistant coach Sean Conner.
Posted by bdm at 8:19 PM

The Berkeley College Knights lost to undefeated conference rival the St. Joseph's College Bears 72 to 60 on Saturday night at Brooklyn Technical High School. It was the first conference loss of the season for the Knights.

The Knights led 12 to 11 when the Bears went on a 12-0 run to pull ahead 23 to 12 before the Knights responded with an 8-0 run of their own to close within three before the Bears managed two more points to take a 25 to 20 first half lead.

The Bears charged ahead with a 17 to 1 run to start the second half to take a 21 point lead before the Knights dropped into a 1-3-1 trapping zone that saw them climb back to within seven points on three separate occassions.

Senior Moyram Espino led the Knights with 12 points and Michael Bloomfield came off the bench to pull a double-double with 10 points and 11 rebounds. The Knights fall to 7-7 overall with the loss and play back-to-back games this weekend with University of Massachusetts-Stockbridge on Saturday and Sarah Lawrence College on Sunday.
Posted by bdm at 8:43 PM