The game was a tight one throughout with the Knights finding themselves behind 1-0 at the halftime before the Blue Jays were able to net two more in the second half to shutout the Knights in the first ever meeting between the two institutions.

Poly outshot Berkeley 24 to 13 with goalkeeper Jonathan Graneros making nine saves for the Knights while falling to 0-2 on the season.
Posted by bdm at 11:37 AM

Going up against an extremely strong squad, the New Jersey men's soccer team lost over the weekend to Manhattanville College by a score of 7 to 1.

Goalkeeper Kleber Gomez suffered the loss in net while Kevin Santos scored his second goal in two games to avoid the shutout for the Bulldogs.
Posted by bdm at 11:35 AM

The Berkeley College men's soccer team from New Jersey netted their first victory in their brief history when they defeated Lehman College 4 to 1 last night.

Lehman would score first on Geovanny Arredone's goal past goaltender Kleber Gomez at the 35 minute mark to end the first half with a 1 to 0 lead.

In the second half, Federico Diaz of Berkeley scored to even the game at 1-1 followed by goals by Jeff Rosenthal, Richard Lopez, and Jordan Rocca as the Bulldogs spread the offense. Gomez stopped seven shots to record his first win.

The Berkeley College women's soccer team lost their first Hudson Valley Women's Athletic Conference contest this year to Yeshiva University by a score of 4 to 0.

Atara Kanarfogel scored three times for Yeshiva and assisted on another, while goalkeeper Odelia Rosenberg stopped all 4 shots she saw. Yeshiva took a 3 to 0 halftime lead.

The loss drops Berkeley to 0-3 on the season while Yeshiva improves to 1-4.
Posted by bdm at 9:52 AM

Berkeley led 1-0 on a goal by forward Tiago Santos, their first lead of the season. Valley Forge would rally with three straight goals before Kevin Santos of Berkeley scored in the final few minutes to give Berkeley an opportunity to tie before time ran out. 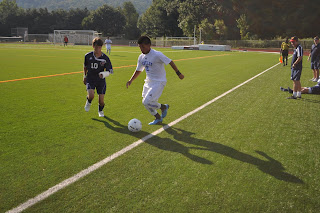 Berkeley's New York men's soccer team had every opportunity to pull out a win against Brooklyn College, but late goals in the first and second halfs by Brooklyn's Mack Diller made the difference in the 4 to 2 loss.

Brooklyn scored first on a goal by Fabian Olguin, but Berkeley responded to tie the game on a goal by Daisei Hiwaki. With less than five minutes to play in the first half, Mack Diller exploded for Brooklyn to give the Bridges a 2 to 1 halftime lead.

Brooklyn would extend the lead on a goal by Drilon Sahitaj before Berkeley again closed the gap to one on a goal by Jermaine Dacres.

Mack Diller would seal the game on a late goal to make the final score 4 to 2.

New York next plays on September 19 against NYU/Polytechnic University.
Posted by bdm at 5:01 PM

Berkeley College's women's soccer team continued to see improvement from last year though they fell to Bergen Community College by a score of 7-1 to fall 0-2 on the season.
Bergen struck first with a goal in the first few minutes of the game, but Berkeley stormed right back with a goal of their own by Meghan Black to tie the score 1-1. While Bergen managed to pull away later in the first half, Berkeley managed to dominate most of the play for the final 18 minutes by keeping the ball in the offensive zone the entire time, but just couldn't manage to score despite multiple shots on net.
Berkeley next plays on Sunday, September 13, at 4 P.M. against Yeshiva University in a Hudson Valley Women's Athletic Conference matchup. Game will be played at SUNY Maritime in Throggs Neck, NY.
Posted by bdm at 9:43 AM

Men
The Berkeley College New Jersey men's soccer team lost their season opener to Sussex County Community College on Saturday, August 28, by a score of 6 to 2.
Berkeley started off well in their first intercollegiate match in the program's history, holding Sussex scoreless in the first half. A change in weather early in the second half, however, would have dire consequences. With little more than 38 minutes remaining in the game, a Berkeley defender slipped and fell in the steady rain allowing a Sussex player to capitalize on a breakaway to score the first goal of the game. Sussex struck like lightning and scored another three goals in less than five minutes to take a commanding 4-0 lead.
Berkeley finally struck back with about 25 minutes remaining in the game as Guillermo Chavez scored the first intercollegiate goal in the program's history to make the score 4-1.
Sussex would score again before Jeff Rosenthal gave Berkeley their second goal of the game.
The men next compete in the Ramapo College Presidents Cup Tournament on Saturday, September 5 against FDU-Florham, and Sunday, September 6 against Ramapo.
Women
Meghan Collister made history on Tuesday, September 1, as she scored the first intercollegiate goal in Berkeley College history for the New Jersey women's soccer team against SUNY Maritime. Already down 8-0, Collister scored on an unassisted free kick to put the New Jersey squad on the board for the first time in its brief history.
Berkeley lost to SUNY Maritime by a score of 11-1 in their first varsity intercollegiate soccer game. The Lady Bulldogs next play at Bergen Community College on Thursday, September 3.
Posted by bdm at 7:53 AM