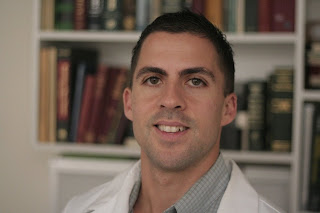 "It is with great pleasure that I announce the hiring of Dr. Shawn Williams as our first cross country coach for both men and women in New Jersey," said Brian Maher, Athletic Director for Berkeley College. "Dr. Williams not only has the athletic experience and background we were looking for to lead this program, but also has an extensive educational and medical background that will serve our student-athletes well."
Dr. Williams is currently an adjunct professor at Berkeley and a 2004 graduate of New York Chiropractic College. In addition, he is a PhD candidate at Seton Hall University.
His background in Cross Country and Track and Field is extensive. As a high school athlete, Dr. Williams competed at a national level and then went on to earn multiple NCAA Division III All-American awards in Cross Country. Following his collegiate career, he trained with clubs such as Adidas of New Jersey and the Westchester Puma Track Club. In 2003 he ran a personal best 4:13 mile at Princeton University and in 2008 recorded a 1:15 half marathon in New York City.
Dr. Williams' coaching career began in 1999 where his team placed third in the prestigious Championship of America event at Penn Relays. In the 2000-2001 season he led Monsignor High School in Staten Island to the Staten Island Triple Crown Championships in Cross Country, Indoor Track, and Outdoor Track. He has also served as a private coach for Urban Athletics in New York City for marathon training and speed and form training from 2005 to 2009.
Dr. Williams has also earned USA Track and Field Level Two coaching certification and has spoken at several conferences on performance enhancement and injury prevention, including at the USA Olympic Training Center. Dr. Williams also serves as a sports medicine advisor to the New York Road Runners Club and has earned subspecialty certifications in clinical biomechanics of posture, pediatric chiropractic, and sound assisted soft tissue mobilization.
Posted by bdm at 12:24 PM