The Berkeley Knights won both of their games this past weekend over Vaughn College and The Culinary Institute of America to improve their Hudson Valley Men's Athletic Conference record to 3-0 and improve their overall record to 5-2.

After defeating Vaughn College on Saturday 69 to 55, the Knights traveled to Culinary on Sunday for back-to-back games. Despite the travel and the strain of playing games for two consecutive days, the Knights were able to walk away with a 73 to 63 win over Culinary.

The Knights next play on Sunday, January 4, against Vaughn College at 1 P.M.
Posted by bdm at 10:17 AM

Senior guard James Dorismond was selected as the Hudson Valley Men's Athletic Conference Player of the Week for the first week in the HVMAC season. In a win over Albany College of Pharmacy, Dorismond led the Berkeley Knights with 22 points, five rebounds, four assists, and four steals.
Posted by bdm at 10:15 AM

The Bulldogs were led by senior guard Richard Webb who led all scorers with 15 points. Webb was named to the All-Tournament team following the game. Forward Donovan Black, leading scorer for the Bulldogs this season, followed with 14 points and 8 of 10 shooting from the free throw line as the Bulldogs shot 70% from the line for the game, making 21 of their 30 free throw attempts.

The Bulldogs led 31 to 22 at halftime and despite repeated runs by the Lions, the Bulldogs managed to hold the lead for the entire second half.

The Bulldogs don't play again until Saturday, January 3, when they travel to West Point to take on Division I Army's junior varsity squad.
Posted by bdm at 8:12 AM 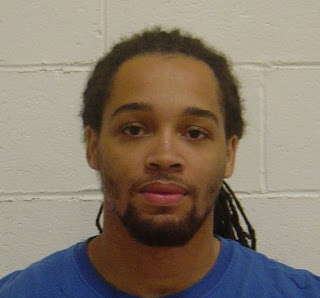 Senior Richard Webb of the Garret Mountain men's basketball team was named to the Heritage's Dairy Stores Classic All-Conference team at Rowan University after leading the Berkeley College Bulldogs to their first win of the season.

Following a disheartening loss in the first game of the tournament to Rowan, Webb led all scorers in the consolation game with 15 points as Berkeley College defeated Penn State Brandywine 55 to 44.
This was the second time in Webb's career that he had been named to an All-Tournament team, having been selected in last year's Ramapo College Tip-Off Tournament as well.
Posted by bdm at 8:06 AM

The Berkeley Knights defeated Vaughn College 69 to 55 at Borough of Manhattan Community College on Saturday, December 13.

The win improved the Knights overall record to 4-2 and kept their perfect record in the Hudson Valley Men's Athletic Conference intact at 2-0.

Despite the win head coach Chris Christiansen was disappointed in his team's performance.

"I'm not happy," said coach Christiansen. "We didn't play well and Vaughn took advantage of our mistakes. They played a good game."

The Knights next play at The Culinary Institute of America on Sunday, December 14, at 1 P.M. in a Hudson Valley conference matchup before going on break.
Posted by bdm at 8:01 AM

The Berkeley College New York City men's basketball team overcame an early first half deficit to earn their first regular season victory in the Hudson Valley Men's Athletic Conference by a score of 83-73 over Albany College of Pharmacy, snapping a two-game losing streak.

Trailing 17-10 with 13:33 remaining in the first half, the Knights (3-2 overall, 1-0 HVMAC) went on a decisive 21-3 run over the next eight minutes to pull out to a 31-20 lead. Forward Moyram Espino (Forest Hills/Hillcrest) led the way with three buckets and four free throws for 10 points, while the Knights' defense stepped up to force seven Panther turnovers during the span.

The Panthers (0-8 overall, 0-1 HVMAC) kept the game close and trailed by only seven points 45-38 with 17:49 remaining in the second half until the Knights went on another decisive 15-6 run to push their lead to double digits.

Berkeley's next two games will be played this upcoming weekend against HVMAC rivals. Saturday, December 13, the Knights will face Vaughn College of Aeronautics on the campus of Borough of Manhattan Community College, and Sunday, December 14, they will travel to Hyde Park, New York to face the Culinary Institute of America. Both games will begin at 1 P.M.
Posted by bdm at 10:02 AM