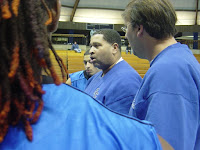 The Berkeley College Bulldogs men's basketball team lost their season opener to the Passaic County Community College Panthers by a score of 90 to 64 at Passaic on Monday, November 3.
Berkeley, led by sophomore Marcus Jones, took an early lead in the first half before falling behind with 3 minutes remaining to go into the locker room down 44 to 41. Jones led all scorers at halftime with 12 points.
The teams traded baskets in the first few minutes of the second half before unforced turnovers, foul trouble, and the lack of an inside presence put the Bulldogs in a hole they could not get out of.
The Bulldogs were led by Jones, who ended up with 16 points, and sophomore transfer Donovan Black and freshman Derron Chaplin who both scored 13 points.
The Bulldogs dominated in the paint in the first half with senior Mannie Malasig and Jones playing tenacious defense and grabbing every loose rebound. Malasig scored 10 points before fouling out with eight minutes remaining in the game.
The Bulldogs next play against the Sussex County Community College Skylanders on Tuesday, November 11, in Newton.
Posted by bdm at 7:10 AM