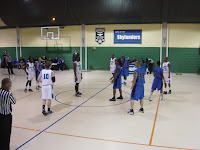 The Berkeley College Garret Mountain men's basketball team saw its record fall to 0-2 in a sloppy performance against the Sussex County Community College Skylanders.
Despite numerous unforced turnovers the Bulldogs found themselves trailing only by two at the half, 37 to 35, mostly due to 15 of 16 shooting from the free throw line.
The second half, however, saw the Skylanders run away with it as they pulled away with an 83 to 69 victory over the Bulldogs.
Donovan Black led the Bulldogs with 21 points, closely followed by Mannie Malasig with 18.
The Bulldogs next play at the Ramapo College Tip-Off Tournament on Saturday, November 15, against Eastern Connecticut University at 5:30 P.M.
Posted by bdm at 9:05 PM