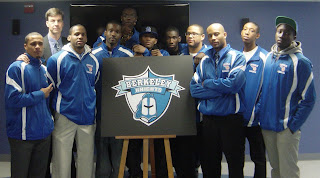 Berkeley College unveiled its first official logo that will represent Berkeley College athletics for all of Berkeley's New York campuses this past Tuesday at its midtown campus in New York City.

"As Berkeley College has evolved academically over the course of the last 75 plus years, so too has it evolved athletically and this logo is only the latest example of this evolution," stated athletic director Brian Maher before a packed standing-room only crowd in Berkeley's student center. 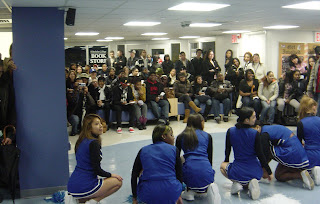 "Despite their relatively short existence, the Berkeley College Knights have established an impressive tradition of success both on the field of play and, more importantly, inside the classroom. This logo represents their strength, their resolve, and their commitment," said Maher.
The unveiling of the logo was part of a pep rally for the men's basketball team that included performances by the Berkeley College cheer squad and dance team. The men's soccer team was recognized as well for their successful introduction into the Hudson Valley Men's Athletic Conference where they appeared in the postseason in their very first season of play.