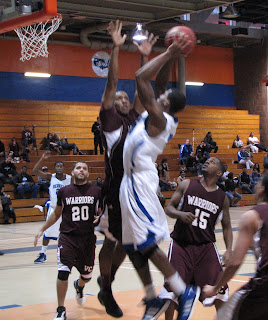 
The Vaughn College Warriors put a scare into the Knights in the first half trailing by only eight points going into halftime, 34 to 26. The Knights, however, would respond with a tough full court press and take advantage of their speed and length to outscore the Warriors by 30 points in the second half.
The Knights were led by All-American forward Jose Stable (EBC for Public Service/Brooklyn, NY), who scored 22 points while adding 7 assists to lead the team in both categories. Fellow All-American center Elijah Craig (Seward Park/Brooklyn, NY) would add 20 points while grabbing a game high 18 rebounds and adding 6 blocks and sophomore shooting guard Jovan Bovell (Jamaica/Jamaica, NY) would catch on fire in the second half by hitting four consecutive three point shots to push the lead for the Knights.

The Knights would shoot 50% from the field for the game while dominating on the boards 45 to 27 over the Warriors.

The win puts the Knights record to 2-0 on the season. They face Lehman College on November 15 at 5 P.M.