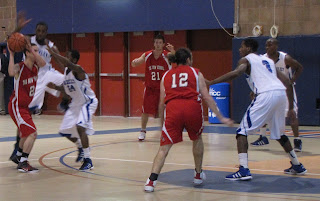 The New York men's basketball team defeated The New School today by a score of 95 to 46 in the first round of the 2nd Annual Berkeley College Invitational.


The Knights started off slowly before their full court press turned the tide midway through the first period, giving the Knights a 41 to 21 lead heading into halftime.

The Knights were led by All-American sophomore forward Jose Stable (EBC for Public Service/Brooklyn, NY) who led all scorers with 25 points while adding 9 rebounds in 31 minutes. Freshman forward Danzel Whyte (Teachers Preparatory/Brooklyn, NY) made his presence known with 17 points and a game high 13 rebounds in only 22 minutes. Junior guard Kaseem Williams (Boys and Girls/Brooklyn, NY) added 15 points and 5 steals.

New School was led by freshman guard Dustin Sodano with 19 points and 5 assists.

For the game the Knights shot 63% from the floor compared to New School's 31%.