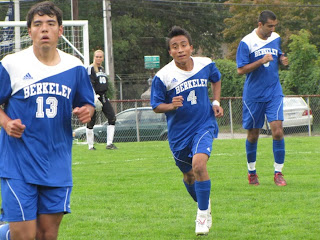 The Knights first defeated City College of New York on Saturday behind a six goal explosion in the second half. The Knights trailed 1-0 at halftime when Alexis Monceaux tied the game at the 58:10 mark as he received a pass from Claes Magnusson and put the ball home to knot the game at a goal apiece. Magnusson would then put Berkeley ahead for good 2:05 later to give his team a 2-1 lead.
Berkeley College would then go on to add four more goals over the final 30 minutes of action to account for the 6-1 final score. Yhonnier Montoya scored two goals in just under three minutes to up the Knights lead to 4-1, and then Lucas Pucheta and Monceaux tallied the final two goals of the afternoon. Berkeley out-shot CCNY by a total count of 26-4 for the afternoon.
The Knights then travelled to New Hampshire where they took on the 11th seeded team in the nation (USCAA) and defeated the Lynx 2-1 in overtime on goals by Dela Wornawovor and Alexis Monceaux.
The wins improve the team's record to 10-5 on the season. They are currently ranked 7th in the USCAA.
Posted by bdm at 10:07 PM