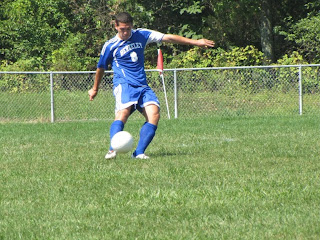 The Knights took the lead at the 12:45 mark of the contest when Johnny Campos scored his first of two goals on the afternoon when he knocked in a rebounding shot by teammate Ramon Arce.
After going into halftime leading 1-0, Berkeley scored again early in the second half as Campos connected on a pass from Arce and scored from point blank range to put the Knights up by a pair. John Jay cut the deficit in half on a direct kick at 54:28. But the Knights scored one more time to cushion the lead when Arce scored on a free kick just two minutes after the Bloodhounds had cut the lead to one.
With the win the Knights improve to 5-7 on the season having won two of their last three. New Jersey next plays at Mount Aloysius on Saturday, October 30 at 1 P.M.
Posted by bdm at 9:59 PM