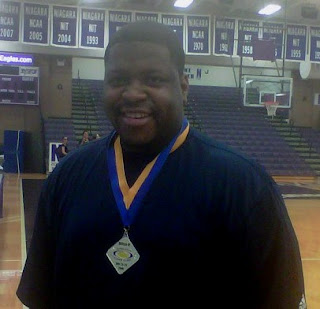 Berkeley College women's basketball head coach Sharod Tomlinson led the New York City women's open squad to their first gold medal ever at the Empire State Games on Sunday with a 79 to 69 win in the final.
New York City hadn't even won a game for the last three years before Tomlinson led them to gold this year.
"He's done such a wonderful job so far at Berkeley that this is something we have come to expect, so I wasn't surprised when he sent me a picture of himself with a gold medal around his neck," said Brian Maher, athletic director of Berkeley College. "No one I know is more deserving."
Posted by bdm at 4:21 PM