The Berkeley College New York women’s soccer team earned a trip to the Hudson Valley Women’s Athletic Conference championship game Sunday afternoon after a 1-0 win against Yeshiva University at the College of Staten Island Soccer Complex.
For most of the first half both teams would trade possessions trying to obtain good field position in high wind conditions. Berkeley managed five shots in the first frame while Yeshiva tallied only two shots. The game would remain scoreless entering the second half.
The Knights would make a line-up change for the second half and it would pay dividends. Freshman Kerry Ann Haughton (Springfield Garden/Queens, NY) would post six shots in the second half including the game winner in the 54th minute. Haughton stole the ball at the top of Yeshiva’s box, raced to the goal and fired a strong shot that passed the keeper’s reach and into the net.
The Knights led in shots 14-4 and in corners 14-6. The win improved the team's record to 3-2 and set up a date for them in the championship game on Sunday, November 4, at 5 P.M. at Tibbetts Brook Park. 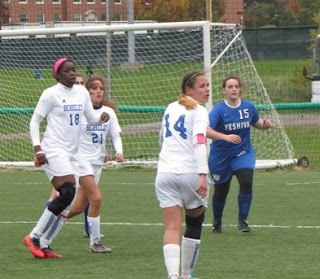