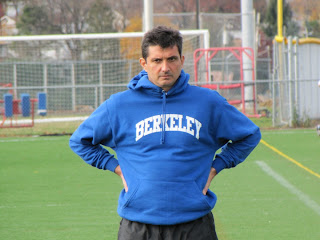 After competing in the Hudson Valley Men’s Athletic Conference (HVMAC) Championship game in only their second season of existence, the Berkeley College New York men’s soccer team is looking forward to an exciting 2010 season. In addition to their success in the HVMAC, the team will compete this season as a member of the United States Collegiate Athletic Association (USCAA).

“As a new member of the USCAA this season, our team will be further motivated by the possibility for selection to a national championship tournament,” says Stavros Zomopoulos, who enters his second season as the men’s head coach. “The program has a very talented group of returning players, having only graduated three seniors, starting with our two co-captains, Claes Magnusson and Christ Assou. We also expect back nine starters and our 2010 recruiting class was very strong, with at least five new players that will compete for a position in the starting lineup.”
Not only is the team expected to be competitive, but the schedule promises to be so as well.
“Our 2010 schedule is an extremely challenging and fun one. Excluding our conference opponents, we are playing both the number one and number two nationally ranked teams in the USCAA, and another nine contests versus NCAA Division III programs representing all of the major conferences in the tri-state area,” says Zomopoulos.
In just two years Zomopoulos has not only orchestrated the development of a competitive squad, but has also advanced the program’s schedule from a six-game schedule in 2008 to a fourteen-game schedule in 2009 and now an eighteen game schedule in 2010.
“Words cannot express the impact coach Zomopoulos has had on our young men’s soccer program,” says Brian Maher, athletic director for Berkeley College. “He has a vision for the program and with it extremely high expectations of himself, his athletes, and the institution. It’s a perfect marriage.”
Posted by bdm at 2:56 PM