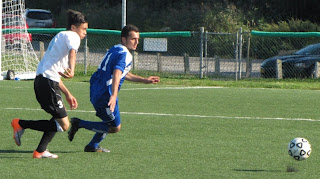 The New York men's soccer team lost 2-1 in double overtime with less than a minute remaining in the game to fall to 0-5 on the season.

After the first 45 minutes of action neither team was able to put one through the net. In the second frame, after a barrage of shots from the Dolphins, they managed to squeeze one through at the 67:41 mark to put the Dolphins up, 1-0. With under three minutes to play, the Knights were deep in the Dolphins' box, when freshman forward Ahmet Colak fed a ball to sophomore forward Dare Aniyikaye at the top of the box that the latter was able to bullet through the upper right hand corner tying the game at 1-1 in the 87th minute. The score would hold up to send the game into overtime despite a 28-13 edge for the Dolphins in shots taken.

In the first overtime, both teams showed some tired legs as only a total of five shots were taken. In the second and final overtime CSI was on the attack, but the Knights did not back down, going back and forth for the first five minutes. In the final five minutes of play, the Dolphins put more pressure on the Knights, tallying five shots. The Dolphins scored the game-winner with just 58 seconds left on the clock.

The Knights host Briarcliffe College on Saturday at 4 P.M. at Aviator Sports Complex in Brooklyn.