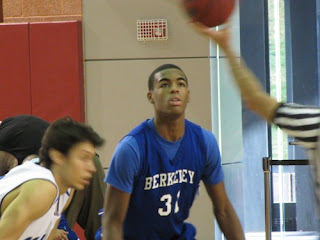 The Drew University Rangers dominated the boards and held off a second half 15-0 run by Berkeley College last night to defeat the Bulldogs 77 to 66. The loss extends Berkeley's losing streak to five straight games as they fall to 2-6 on the season while the Rangers improve their record to 2-3.
The game remained close for most of the first half before the Rangers went on a 18-2 run to increase their four point lead to a commanding 20 point lead and led at halftime 44 to 29.
Berkeley, however, would go on a run of their own in the second half to close the gap to 51 to 47 with a little over 13 minutes to play before Drew recovered and pushed the lead back to over 10 and held on for the victory.
The Bulldogs were led once again by freshman guard Jarrel Young (Newark Tech/Newark) who led all scorers with 18 points and freshmen Devin Bennett (Manchester/Paterson) grabbed 10 rebounds. The Bulldogs were outrebounded by a 45 to 33 margin.
Posted by bdm at 11:02 AM