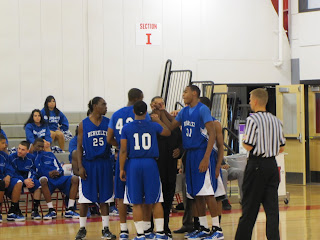 For the second consecutive year the Berkeley College New Jersey men's basketball team lost to Rowan University in the first round of the Heritage's Dairy Stores Classic only to bounce back and defeat Penn State Brandywine in the consolation game to come in third.
The Bulldogs gave Rowan a much tougher time this year than last year keeping the game close for most of the first half before a 14-4 run at the end of the half produced a 44 to 25 advantage for the Profs. Unlike the previous year when Rowan defeated Berkeley 99 to 45, the Bulldogs fought hard in the second half keeping Rowan in check offensively for a final score of 82 to 60.
The Bulldogs were led by junior Donovan Black (Morristown/Morristown, NJ) with 15 points and freshman Jarrel Young (Newark Tech/Newark, NJ) with 12 points.
In the consolation game, the Bulldogs were down at halftime 25 to 23 to Penn State before Young rallied the team to a 71 to 65 victory. Young led all scorers with 23 points while also chipping in with five rebounds, seven assists, and three steals. Freshman Sherone Nelson (Eastside/Paterson, NJ) had a game-high 16 rebounds and added 10 points.
The Bulldogs are now 3-7 on the season. Their next game is Tuesday, December 15 at 7 P.M. at Rutgers-Newark.
Posted by bdm at 11:17 AM