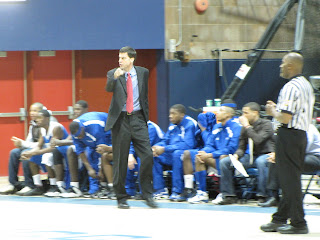 Berkeley College's New York men’s basketball team's early season struggles continued in conference play as the Knights lost to rivals Vaughn College 71-49 and Culinary Institute of America 83-75 in consecutive games to fall to 0-2 in the Hudson Valley Men's Athletic Conference and 2-5 overall.
It was an uphill battle all night for Berkeley against Vaughn, losing one of its top players, Damir Redzepagic (Cardinal Spellman HS/Bronx, NY), to injury in the first three minutes. The Warriors held a substantial advantage on the boards, out-rebounding the Knights 49-26; nevertheless, Berkeley managed to stay close and trailed only by eight 55-47 with seven minutes to play before Vaughn would go on a 14-0 run to put the game out of reach and end a seven-game losing streak to Berkeley. Kaseem Williams (Boys & Girls HS/Brooklyn, NY) led Berkeley (2-4) with 13 points and six rebounds while Joshua Witsell (Jericho HS/Jericho, NY) added 10 points.
In a Sunday matinee at Culinary, Berkeley got off to a fast start in the first half, leading by as many as 12 points. The Knights held a 47-40 lead with 16 minutes to play in the second half when the Steels ran off 14 consecutive points to take a seven point lead 54-47 and led by as many as 11 points before Berkeley would bounce back. Poor free throw shooting plagued the Knights down the stretch and allowed Culinary to eventually hold off the Knights and send Berkeley to its fifth straight defeat.
Williams led the Knights once again by scoring a double-double with 28 points and 10 rebounds. Francis Edouard (Nazareth HS/Brooklyn, NY) scored 15 points and contributed three blocked shots in the loss.
Berkeley’s last action of 2009 will come this Saturday afternoon at 3 P.M. against non-conference Marywood University in Scranton, PA.
Posted by bdm at 1:54 PM