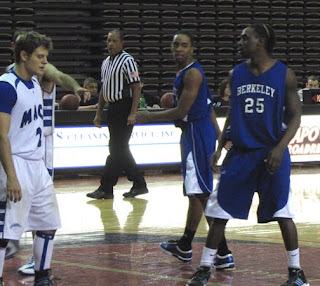 The Berkeley College New Jersey men's basketball team lost in overtime against Yeshiva University 64 to 63 in the consolation game of the Ramapo College Tip-Off Tournament on Sunday.

Down 27 to 24 at halftime, the Bulldogs managed their first lead of the game with 15 minutes remaining in the second half on two free throws by freshman guard Jarrel Young (Newark Tech/Newark, NJ). Yeshiva would answer right back and from that point on the lead would go back and forth until a free throw by Tyron Davis (Eastside/Paterson, NJ) would tie the score with .5 seconds remaining to send the game into overtime.
The overtime period mirrored regulation with both teams taking leads. Junior forward Donovan Black (Morristown/Morristown, NJ) would be fouled while taking a three point shot with .5 seconds remaining and his lone miss at the line would be the difference in the final score.
Unlike the Wentworth game the day before, Berkeley dominated the boards against Yeshiva outrebounding the Maccabees 43 to 34. Free throw shooting would continue to plague the Bulldogs as they managed only 57.7% from the line.
Berkeley was led by Young who led all scorers with 19 points and was selected to the All-Tournament Team. Sophore guard Justin Lewandowski (Bordentown Regional/Bordentown, NJ) would also reach double figures with 10 points, including three three-pointers.
Berkeley next plays at Montclair State on Tuesday.
Posted by bdm at 8:27 PM