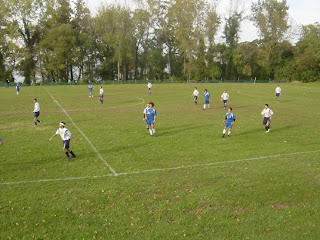 The Berkeley Knights men's soccer team once again came from behind, only this time their last-minute heroics saved their season.
Playing at Webb Institute on a cold and windy day on a soccer field that overlooks the Long Island Sound, the Knights took an early second half lead with a goal by Alexis Monceaux.
Webb answered with a goal of their own less than two minutes later to tie the score and then managed two more quick goals to take what appeared to be a commanding 3 to 1 lead.
With less than six minutes remaining in the game and with a berth in the Hudson Valley Men's Athletic Conference playoffs on the line, the Knights managed to score twice to send the match into overtime with goals by Patrik Lundberg and Abdelaziz Elhag.
After two scoreless overtimes, the match was declared a tie due to darkness leaving Berkeley with a 1-2-1 record in the HVMAC and the fourth seed in the HVMAC postseason.
The Knights play Sunday, October 26, against the number one seed, Culinary Institute of America in New Hyde Park at 1 P.M.
Posted by bdm at 7:22 PM