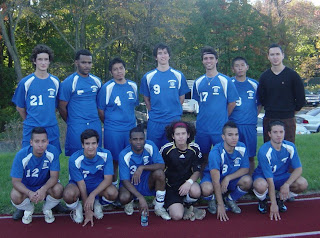 The Berkeley Knights played out of character Sunday by taking an early lead against The Culinary Institute of America, scoring the first goal of the game less than a minute into the game by Patrik Lundberg.

Culinary Institute responded, however, by scoring six unanswered goals to give the Knights their first defeat in the Hudson Valley Men's Athletic Conference by a score of 6 to 1.

The Knights' next game is on the road against Albany College of Pharmacy on Sunday, October 19, at 1 P.M.
Posted by bdm at 8:42 PM