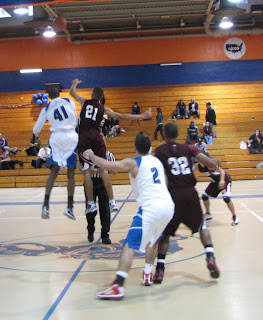 Eastern Connecticut led by as many as 18 late in the first half Friday and by 14 with eight minutes left in the game before the Berkeley Knights closed the gap to five with just over a minute left. Eastern missed ten of 29 free throws in the game but were 9-for-10 from the stripe inside the final minute to hold off the surging Knights.
Berkeley got a game-high 18 points from freshman Jose Stable and a game-high 14 rebounds from sophomore Damir Redzepagic.
In the consolation game, Berkeley lost to Emerson College by a score of 68 to 63 despite outrebounding Emerson 45-17. The Lions forced 28 turnovers, however and connected on 54.2 percent of their second-half shots. Jose Stable dominated play in the tournament for Berkeley with 17 points and 13 rebounds. Freshman center Elijah Craig had a game-high 20 points and 11 rebounds against Emerson, sinking nine of 11 field goals. The losses drop Berkeley to 3-3 on the season.
Posted by bdm at 7:16 AM