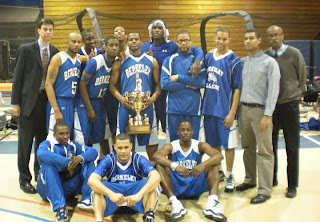 With more than 200 fans in attendance, the Berkeley College Knights won their seventh consecutive Berkeley Cup on Saturday at Borough of Manhattan Community College.
The Berkeley College Bulldogs led early 17 to 9 behind a suffocating full court press before the Knights responded behind seniors Moyram Espino and Willie Bowman III's aggressive attacks to the basket to go on an 11-0 run for a 20 to 17 lead. It was a lead the Knights would never relinquish.
The game was filled with runs but the teams closed out the first half with the Knights holding on to a 41 to 36 lead. The Knights, however, got the first run of the second half scoring eight consecutive points before the Bulldogs scored their first bucket of the second half after nearly four minutes had gone by. The Knights continued the pressure opening up as much as a 17 point lead in the second half, but the Bulldogs kept responding with runs of their own to close within eights points several times.
Final score was 96 to 87 Knights.
Posted by bdm at 8:39 AM